‘Strength is the product of struggle’ is a logo on the back of a t-shirt I received after competing at the Central Districts Powerlifting Championships. This saying is applicable to many sports but it is one that relates especially well to Powerlifting where over the years athletes will perform countless repetitions, struggling to overcome the weight on the barbell. It is true that strength training can be that simple: load the bar to a point at which the weight becomes a struggle and then complete a few reps. It works, the athlete will get stronger, but there are a few key insights if an athlete wishes to get stronger and stay stronger. Below are three things I consider to be crucial for strength development.

For me, this is the most important aspect of strength training. If you want to get stronger you have to be consistent. You could follow the ‘perfect’ program but if you follow it for a few weeks then stop training for a while before starting again you’ll never make great gains in strength. I know this because I have done it myself.  I used to train at high school and my early university years - I would train for a few months then stop for a few weeks, sometimes months. I got nowhere. It wasn’t until I was consistent in my training, training for months (and now years) that I really made great gains. More important than choosing a program to follow is simply choosing to get into the gym day after day (within reason!), week after week and lift. If you want to get strong you must train consistently.

This sounds a bit obvious but bear with me. All you need to do to see why I stress this point is look around the gym next time you are there.  I can almost guarantee you will see (likely on the bench press) someone going for a one rep maximum. This person will be struggling, more than likely using bad form and in most cases they’ll have a spotter helping them to complete the rep saying “it’s all you bro!”.  Chances are this same person will be seen repeating this routine and the weight on the bar is unlikely to be any heavier. Truth is that’s not training for strength, that’s simply testing strength. Testing doesn’t need to happen regularly. You will not get far if all you do is test your strength.

So then, how is strength developed? Through training using rep ranges greater than one. For a newbie to strength training almost any rep range, even higher ones like 8-12 reps, will build strength but as an athlete gets stronger it should primarily be about 3-6 reps per set. The goal during training should not always be to push to failure, more often than not a rep should be left in the tank. This helps to avoid injury, allows good form to be used consistently and therefore efficient motor patterns to be drilled in.  It’s a myth that you must push to failure to gain strength.  Most, if not all, strength athletes do not train to failure very often at all. They don’t train soft, they train hard but smart.

If you want to get stronger you are much more likely to get there using compound exercises. Compound exercises are multi-joint exercises requiring the use of many different muscles; exercises such as the Squat, Deadlift, Bench Press, Dips, Chin Ups, Barbell Rows etc. These movements are more neurally demanding and involve a lot more muscle mass than isolation (single joint) exercises e.g. a front squat trains a greater amount of overall muscle mass and requires far more skill and coordination than a leg extension.  Compound exercises also result in a greater increase in anabolic hormones (such as growth hormone and testosterone) than isolation exercises, so will also result in greater muscle hypertrophy (or growth) in the long term. Clearly without delving any deeper it is clear to see that compound exercises are the smarter choice.

If you want to get stronger for the purpose of improving your sporting performance, then compound exercises will be far more beneficial than isolation movements. This is because they more closely mimic movements that occur in the sporting arena. As with all training, it needs to be specific for it to translate.  In this case, specific movements don’t relate to the fact you will actually squat in a game, but the fact that hip and knee extension occur as a closed chain movement in running as it also does in the back squat. Therefore, the muscle groups will be trained in a similar manner to the sporting environment and so the strength gains will translate to a greater degree than if an athlete did hamstring curls and knee extensions. Finally, don’t be fooled into thinking that because the squat or deadlift may, at times, be a grind that it won’t help improve speed and performance. I have seen my training partner jump from a static start to >120cm high while weighing 115kg doing no more than his normal resistance training. It is highly unlikely you will become muscle bound and slow, more likely muscular and fast. In fact, there is a saying “when all else is equal, the stronger athlete wins” - remember that.

So there you have it, those are what I believe to be three keys to strength.  Not a comprehensive list, just a few things that I know, if taken on board, will make a huge difference to your strength gains in the long run.

Hayden Pritchard, BSc (Hons) Sport and Exercise Science
To find out more about Hayden, check out his Facebook page www.facebook.com/hjp62 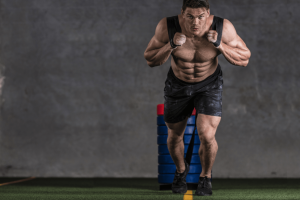 If your goal is to increase muscle mass - here's some info on the three key areas to focus on.
Join the Community